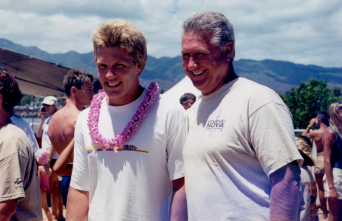 FUHS alumni William Brown and Billy Brown are this year’s Wall of Fame inductees. Both father and son will be honored at a Homecoming reception on Oct. 7. Each year the school selects two FUHS graduates who have contributed to the Fullerton community and to their areas of expertise. Tribe Tribune managing editor Reagan Glidewell, who started swimming competitively at age 8, recently spoke with the Browns who were both top swimmers for Fullerton and who share the same love for the sport. Glidewell learned that William coached her aunt Karin Cawthra Grasko, a 1998 FUHS graduate, in swim and that Billy and her aunt competed together. Billy also knew Glidewell’s late mother Kelley Cawthra Glidewell, both graduating in 1996. The Tribe Tribune is grateful to both alumni for sharing their stories with us.

Bill Brown, class of 1964, has a resume that makes him the perfect inductee for this year’s Fullerton High School’s Wall of Fame. Brown is especially praiseworthy for his 2008 documentary Hidden Epidemic that showcases the seriousness of post-concussion syndrome.

His film matters because there was a time when concussions were ignored, like when Brown was a freshman swimmer at FUHS in 1960. Brown remembers wanting to set up on the other side of the pool so his coach could time him. He was hurrying on the pool deck when he slipped.

“I went up and landed on my tailbone,” Brown said. “The energy then went up my spine. Back in those days, it was just one of those, ‘Oh, come on, shake it off.’”

But Brown couldn’t shake it off.

It usually takes 10–14 days to recover from a concussion, but Brown’s headaches, memory loss, and mood swings persisted not for days or weeks but for years.

Brown said that he could be exposed to something that he truly cared about, but the injury would cloud the memory. Brown searched for an answer to his condition.

“There’s a lot of what I would call free floating anxiety and non-specific depression. You know, ‘I feel anxious but I’m not. I’m worried and I don’t know why,’” Brown said. “I made it my business to spend a lot of time during high school in the Fullerton public library. I was desperate and hungry for answers, and there were none.”

That search for answers would eventually culminate in Brown writing and directing Hidden Epidemic that documents the concussion of a cheerleader. By combining narrative with doctor interviews, Brown educates his audience about how post-concussion syndrome affects academics, relationships and daily life.

Although Brown felt the weight of post-concussion syndrome in his own life, he still remained one of the most successful athletes in FUHS history. Brown went undefeated in swimming in 1964 and set a CIF record in the 100 freestyle. Brown earned All-American honors for water polo and swim his senior year, and Fullerton won the CIF Championship in 1963 and 1964.

He also helped the Trojans earn a NCAA Swim Championship in 1967 while he studied Film/Television Production at USC. He is a founding member of the USC Cinema/Television Alumni Association.

With his love for research and education, Brown became a high school English, history and psychology teacher. He taught at La Habra and Troy before coming to Fullerton in 1990.

Campus supervisor Rose King says that Brown “did so much for the kids.” The student’s experience at FUHS was his number one priority.

“I helped Bill and we would host parties like a Luau,” King said. “Students could go swimming, and we would have guys [twirling fire torches] performing. We’d set up the volleyball net. We just did stuff for the kids. It was fun.”

Although he loved history, Brown said psychology was his favorite subject. He tried to make his class interactive and dove deeper into the “why?”

“I was kind of copying a format that came from Harvard designed to allow the learner to understand their world better, who they are, and who other people are,” Brown said. “We didn’t spend time memorizing when and where Sigmund Freud was born. It allowed us to go deeper into why. Why did this happen? Why do you think somebody feels that way?”

Brown took a two-year break from teaching to direct the film Dream Rider (1993). He wrote the screenplay based on the true story of Bruce Jennings whose leg was amputated after a motorcycle accident in 1970 when Jennings was a senior at Troy High School.

Brown’s fascination with psychology and “why” compelled him to write the film which co-starred James Earl Jones as a fictional mentor to the Jennings character.

“Bruce Jennings knew my sister who went to high school with him,” Brown said. “He would come over to our house and play basketball next door. I was learning more about the guy and I thought, ‘I think there’s a real story here about healing, about getting through tough times.’”

his leg was amputated. Jennings, who also suffered from multiple head injuries, took up cycling while recovering and became the first one-legged person to cycle across the United States. Through making the film, Brown connected the dots of his own head injury complications.

From his own experiences, Brown knew a person can’t just shake off depression that sometimes comes with post-concussion syndrome. And despite fighting a constant battle, Jennings, at age 34, died from a drug-alcohol combination that was likely suicide.

After retiring from FUHS in 2009, Brown continued to spread awareness about post-concussion syndrome and suicide prevention. Brown has lectured about PCS at schools such as the Gonzaga Law and University of Washington and has developed a suicide prevention curriculum for schools in the Northwest.

“It’s one thing to say that Bruce Jennings committed suicide, and he died on this date. It’s another to learn what the probable causation was and why,” Brown said. “I’d learned about Bruce making that movie and three years later when [my son] Billy got his concussion, I was up to speed immediately. I was able to find the right kind of doctors that could treat him in the right way. There’s more I need to learn here. And whenever I learn, I can share.”

Brown, along with his son Billy Brown, Jr., will be honored at a homecoming ceremony on Oct. 7. There will be plaques honoring them both and will be displayed in the front office. 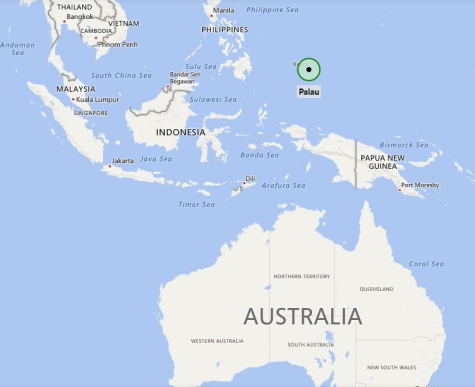 Look at a map and you can see why Palau—a small sovereign nation in the western Pacific Ocean—is the perfect place for open-water swimming. Palau (rhymes with “allow”) is about 300 small islands, totaling just 177 square miles. The country (1,000 miles east of the Philippines) registers as a tiny dot on the map.

So when FUHS alum Billy Brown, class of 1996, got the call from Palau aquatic officials begging him to coach their national team, it was surprising they wanted him to train athletes for swimming pool events in addition to open water.

After all, Billy is an expert in open water (swimming in outdoor bodies of water) and Palau is surrounded by thousands of miles of ocean.

Brown was living in Hawaii in 2013 when he got the job offer.

Although only a few Palau swimmers qualified for Olympic competition for Brown’s 2016 and 2020 teams, Palau has a population of 20,000. It’s amazing to have even one athlete qualify. Brown is proud of helping swimmers build their confidence by having athletes frequently train in open water.

Brown said that his pool swimmers were competent in the 50 and 100 meter freestyle, but they were intimidated by trying to swim a 200 backstroke or 200 freestyle. “Then you’d take them on an ocean swim and all of a sudden they’re like, ‘oh crap, I just had a three mile ocean swim. I can do a 200 free.’”

Brown also taught other skills such as navigation, currents, and catching your boat. The Islands of Palau serve as one of the largest marine sanctuaries in the world. Brown said coaching the Palau team and swimming open water gave him the opportunity to promote ocean safety and respecting the environment.

“It was so cool teaching them ‘here’s this fish, here’s that reef, here’s how we protect it.’ We had a lot of tie-ins with that, how to treat the ocean,” Brown said.

This week, though, Brown is on dry land 7,000 miles east of the islands. He’s scheduled to be honored at the Oct. 7 homecoming game, along with his father Bill Brown, as an inductee to the FUHS Wall of Fame. The annual award is given to alumni who have made significant contributions to the FUHS community and to their fields of expertise.

Billy was the 1996 CIF Swimmer of the Year, and captured the CIF record in the 100 breaststroke. After graduating from Fullerton in 1996, Brown attended the University of Massachusetts, where he became the 100 and 200 breaststroke Atlantic-10 Champion in the 1999-2000 season, qualifying for the Olympic Trials that same year. His 1:58.66 in the 200 breaststroke passed the qualifying mark and Brown became the only swimmer in UMass history to qualify for the NCAA Championships.

After college, Brown grabbed his USA Swimming National Championship backpack and some board shorts and traded in cold Massachusetts for warm Hawaii.

But his strength as a coach comes from his passion as a swimmer.

In 2010, Brown competed in an open water relay from Oahu to Kauai. The 48-hour event is a non-stop 107-mile relay with five other swimmers. The swimmers take turns swimming one hour on and five hours off. Brown admits it was tough.

“I was going about 2.5 miles an hour usually. But then the current was so bad 8 to 12 miles off of Kauai,” Brown said. “It was 11 at night when we started to hit the bad current that was head on and the guy before me, no joke, went only 350 meters in one hour.”

Because the relay was non-stop, the team had to swim at night, which Brown says was intimidating even for him.  Brown swam his first turn at 10:30 p.m.

“I can remember just jumping in. All those bubbles come around and you just don’t know what you’re jumping into? There were five minutes there when I was internally screaming and having a five-year-old temper tantrum while holding a good game face. ‘No, it’s great, team. I got it. No problem,’” Brown said sarcastically.

Open water remains Billy’s passion. “I’ve almost touched the pilot whales right off the coast of Morocco. I’ve swum over a great white two miles off one night. I’ve seen two tiger sharks. I’ve swum with countless dolphins,” Brown said. “Out there, it’s just really cool. It’s a very fun thing to do. And that’s really been a big highlight of my life for the past 20 years.”

Brown and his father Bill currently live in Idaho. Billy has been spending time with his dad since Billy’s mom, Beth, passed away in 2021. Father and son, however, plan to move to Hawaii together in the near future. A fitting plan for two of Fullerton’s all-time best swimmers.